I am often asked questions about how to get an article approved by Wikipedia. While I understand the spirit of the question, many people who ask it do not.

I have run a professional Wikipedia writing service for many years now. Based on my decade of experience on Wikipedia, I have seen many guidelines created that have hindered people from editing Wikipedia. However, none have been as confusing to new editors as the article for creation process.

Articles for creation (Often referred to as AfC) is a way for users to submit new articles to Wikipedia and have confused many to believe that it is an approval process. This is far from what it actually is and here is why.

What is the Articles for Creation Process on Wikipedia?

Articles for creation is a project of Wikipedia set up with the purpose of allowing people to submit articles for peer review and movement to the main space of Wikipedia.

People can use the article creation wizard to walk them through the process of how to create an article draft. They can then submit the draft for review by Wikipedia editors. Volunteer editors will review the submission. If they feel it meets Wikipedia guidelines, move the article to the main space as a live article.

This is Wikipedia’s version of a Wikipedia writing service, only you create the article and submit it to the site for editors to review it for adherence to guidelines. This makes it closer to a “peer review” than any type of real approval process.

How the Articles For Creation Process Really Works

What AfC really does is create article delays. Those with great articles often submit them for review and they end up sitting there for months. Even Wikipedia acknowledges that it will take “weeks even months” to review submissions (see image below). So even if you have a great article that clearly passes Wikipedia guidelines, the AfC process will delay it going live for quite some time.

People submitting good content are often turned off at the time it takes to have an article moved to mainspace. They ultimately will decide not to continue contributing to Wikipedia because of it. In addition, the process really is intended to catch spammers from posting article directly to the main space.

While posting spam is against Wikipedia guidelines, posting an article to the main space is not. As such, it also gives a false sense that people MUST submit an article to Wikipedia for approval. This is far from the truth. It actually causes many people and companies to hire a Wikipedia writing service in order to cut through the red tape that the process creates. 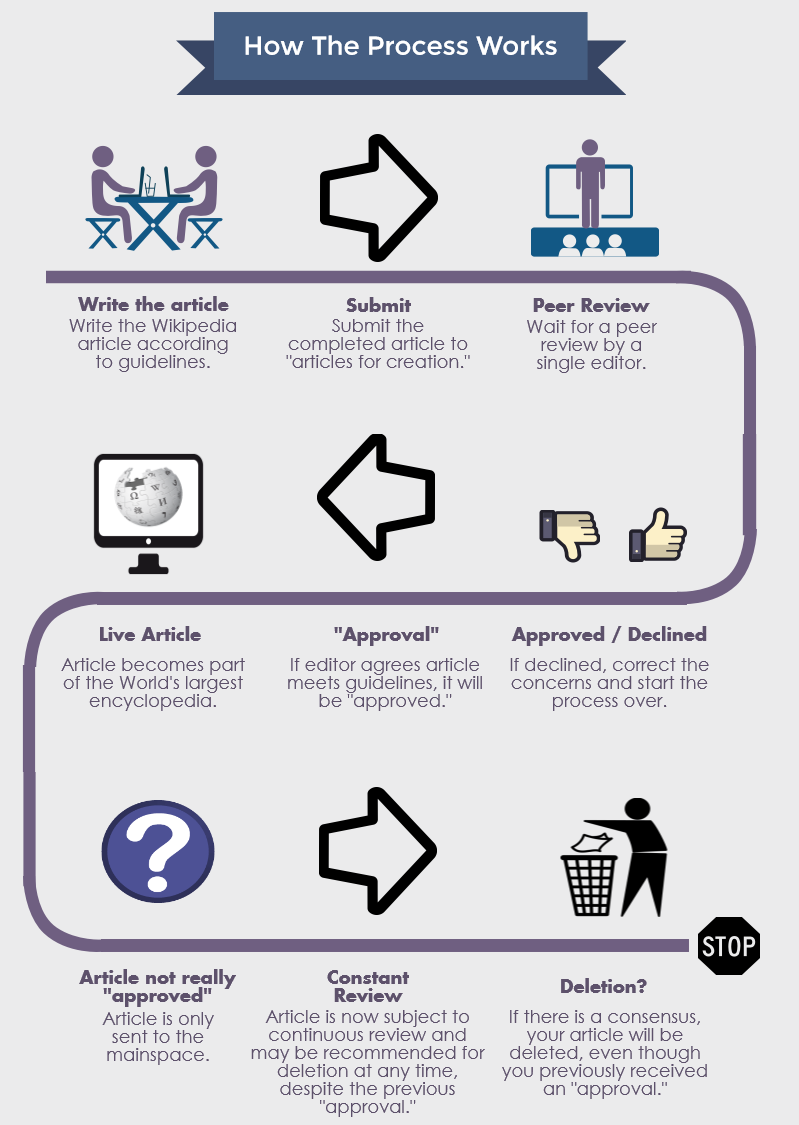 Issues With the Wikipedia Approval Process

Now reality can set in. An article is going to sink or swim on its own in the main space of Wikipedia. As such, posting an article to the main space is not against Wikipedia guidelines. Again, do not necessarily have to go through the AfC process.

While it is a good idea in theory, there are many reasons why the AfC process can otherwise hold up a good article from being created.

If you are unsure if your article meets Wikipedia guidelines, then AfC could be the way to go. However, as the owner of a Wikipedia writing service that only creates articles that adhere to Wikipedia guidelines, I would rather put the article directly into the main space so that it can be reviewed by the community as a whole, not judged based on the bias of a single editor.