The Wikimedia Foundation has made it their goal, job, motto, or whatever you want to call it, to spread the idea of Wikipedia throughout the world. As a result of their noble effort (oh I wish you could read the sarcasm in that statement), Wikipedia is now available in 288 languages (as of the date of this article). I will credit the increase in available languages to the volunteer editors who translate Wikipedia into foreign languages as opposed to the Foundation who is basically only in place to beg for and spend money faster than White House. While I normally complain about editors and how they misinterpret guidelines and run the site as if they own it, I will actually applaud them for their efforts. 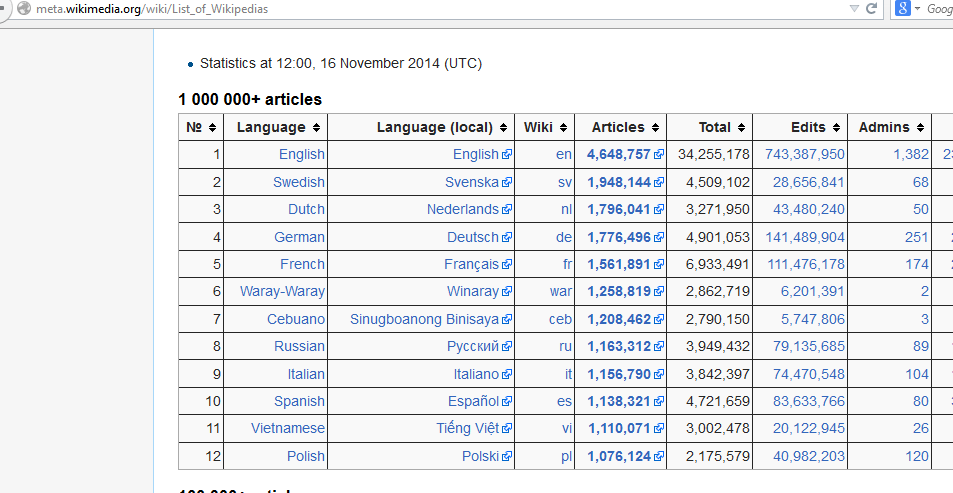 Many Wikipedia languages are created from other Wikipedia languages. There are many editors who translate Wikipedia into foreign languages which helps increase the number of quality articles in Wikipedia. With that being said, there are a number of quality Wikipedia sites in foreign languages, including German, French, Italian, Spanish, and Russian. As of November 15, 2014, English is the largest Wikipedia with over 4.6 million articles. Russia comes in at number eight with 1.1 million articles. I only mention Russia because of recent news headlines coming out of the Kremlin.

New York Magazine, the Business Insider, Time Magazine, and dozens of other major media outlets have recently reported that Russia plans to launch its own version of Wikipedia. Since the Kremlin is not fond of the “untrustworthy” website we know as Wikipedia, they plan on creating their own state-run alternative as opposed to relying on people who translate Wikipedia into foreign languages. It’s kind of sad, but this is the biggest news out at the moment regarding Wikipedia. I am sure that Jimbo is furious about receiving less media coverage than Putin. In fact, I am nor really how such news made it as far as it has, but we really don’t need more to explain how stupid of an idea it is to have a government run Wikipedia.

Since the idea of a new Russian Wikipedia seems to be taking up the headlines, I thought I would mention a few that may be a little more noteworthy at the moment:

So short story long (yes, I said it correctly), no one really cares about the new version of Wikipedia that the Kremlin plans to launch in order to educate its own citizens on history. I implore the media to start taking up more important issues dealing with Wikipedia and the Wikimedia Foundation.

by Michael Wood – Michael Wood is an online marketing expert and owner of Legalmorning.com. He specializes in reputation and brand management, article writing, and professional Wikipedia editing. He is an expert Wikipedia editor and has helped hundreds of businesses and people post their articles to the site where they have otherwise failed. He is a regular contributor to many online publications including AllBusiness Experts, Yahoo, Business Insider, Business2Community, and Social Media Today. Wood is not employed or affiliated with the Wikimedia Foundation or any of its projects.