Marketers need to start paying attention to Wikidata. In addition to helping their clients obtain a Google Knowledge Graph, it is an excellent source for mining useful information.

I was contacted by a client in early 2015. There was a big issue with what they stated was their Wikipedia article. It was displaying someone else’s image and they wanted me to change it. No problem as professional Wikipedia editing is what I do.

After going to the page, I saw that it fact the correct image was still there. After speaking with the client, they insisted I must be looking at the wrong page. I had them explain to me the exact path they took to get to Wikipedia. It took less than a minute to figure out they were looking at their Google Knowledge Graph, not their Wikipedia entry.

The problem was that the client thought their Google Knowledge Graph was populated solely by Wikipedia and that by changing Wikipedia the Graph would automatically change. As I will talk about later, this is not exactly true.

After adding the correct image to the “Wikidata” entry for the client, the correct picture appeared a few weeks later.

So what exactly is Wikidata and how can marketers make use of it?

Before learning how to leverage Wikidata, you need to understand what it is and what it does.

Wikidata is a project of the Wikimedia Foundation. That’s right the nonprofit organization behind Wikipedia. It was launched in 2012 and was the first new project of the Foundation since 2006.

Wikidata acts as a repository of information, touting itself as the common source for all information. For instance, it allows entries for dates of birth, birth names, occupations, company foundation dates, etc.

The purpose is to have once central database with common information that can then be used other placed.

Wikidata is open source (Wikipedia refers to it as a “collaboratively edited knowledge base”) so anyone can edit the information. In addition to data entries, it allows for entries of sources to verify the information. It is a “Wikipedia” of sorts, but simply compiles information as opposed to telling a story.

There are rules to editing Wikidata. They are not as stringent as Wikipedia, but there are notability guidelines.

Wikidata and the Google Knowledge Graph:

Wikidata is one of the most important aspects to establishing a Google Knowledge Graph.

Previously, this information was fed with Freebase, an open source collection of data that was largely user-generated. Freebase is essentially the forerunner to Wikidata and was owned by Google.

A few years ago, a client of mine told me that I needed to get to know Freebase as it was going to revolutionize the way data appears in search. I didn’t realize its full impact until the release of the Google Knowledge Graph.

In late 2014, Google announced that it was shutting down Freebase and transition the data over to Wikidata. By March 2015, an API was created to transfer all information to Wikidata; and, Freebase then became a read-only database.

Since that time, Wikidata has become one of the main sources used by Google to populate its Knowledge Graphs.

Does this mean you will get a Knowledge Graph simply by creating a Wikidata entry?

Well, that answer is difficult to answer. As stated previously, you cannot edit the data within the Graph, only influence it. From experience, Wikidata is one of the main influences on the Graph, as is Wikipedia, meaning that there is a strong chance you will obtain a Knowledge Graph if you have a Wikidata entry. However, you should not consider Wikidata as the golden ticket to obtaining the graph. 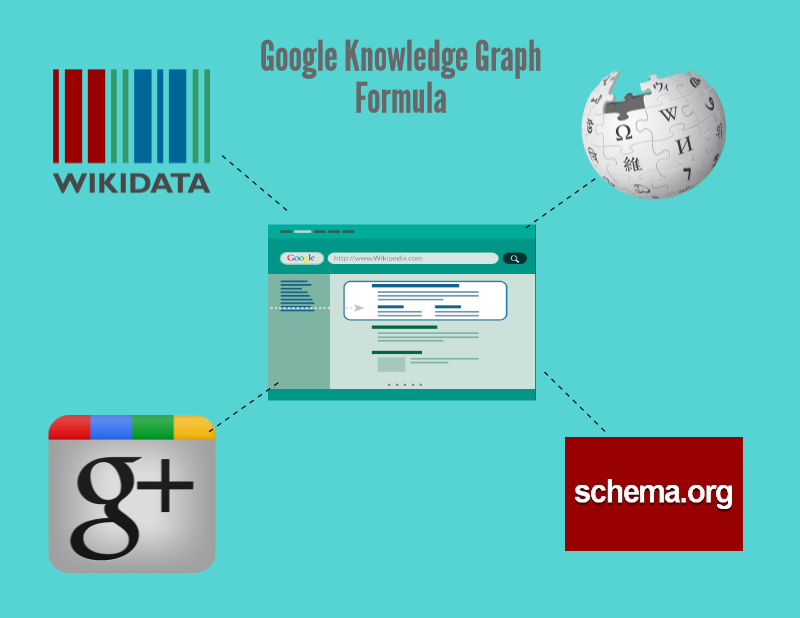 Having a Wikipedia entry as well as schema markup on your website will help, but you cannot skip Wikidata if you expect to have a Knowledge Graph. After all, Google owned Freebase and decided to turn the content over to the Wikimedia Foundation. You better believe that Google is still making use of that information and all future information that is entered into the database.

Other ways marketers can use Wikidata:

Now that we got the Google Knowledge Graph out of the way (more than 90% of you will probably opt out of reading further), here are additional ways that marketers can use Wikidata. After all, there is more to the world than a Knowledge Graph.

Big data is becoming more important in the world of marketing. Companies are springing up overnight to help you not only collect, but analyze data. Using data to understand your target audience is a key component for any marketing campaign. Wikidata has APIs that allow you to extract information from the 40+ million entries currently in the system (as of 2015).

Wikidata is also easy to compile your own list of information for marketing purposes. For instance, let’s say you want to make a contact list of banks in the United States for a direct mail campaign. You can purchase a list through Equifax or similar service. Or, you can extract the information from Wikidata.

From the image above, you can see the headquarter locations for Citibank as entered in Wikidata.

Wikidata is growing by leaps and bounds (keep in mind that it is only 3 years old but already one the main sources used by Google). The many uses outside of obtaining a Knowledge Graph and mining data are yet to be seen; however, with any new marketing tool, expect new creative ways to be revealed in the near future.