Yes, Wikipedia has a civility issue. Let’s face it, the entire world does. We no longer live in a society where “please” and “thank you” are commonplace. Too many people are worked up about something, and ready and willing to fight you “just because”.

Yes, Wikipedia has a policy on civility. In fact, it is one of the site’s five pillars. Well, if it’s a hard and fast rule, is there really a civility issue on Wikipedia?

A recent story published by Slate got me thinking as to whether Wikipedia does in fact have an incivility issue. The short answer in my opinion is yes. Here’s the background as to why I believe so.

Wikimedia Foundation versus the Wikipedia Community.

Some people are still confused about ownership of Wikipedia. The website itself is run by a non-profit organization known as the Wikimedia Foundation. While the foundation is technically the “owner” of the site, it has long been established that volunteer editors determine what takes place on Wikipedia without interference from the foundation.

“On June 10, a Wikipedia administrator with the username Fram was banned by the Wikimedia Foundation from editing the English encyclopedia for one year,” writes Stephen Harrison for Slate.

Editors, even administrators, get banned for various reasons on Wikipedia so this really shouldn’t be news. However, it is the “Wikimedia Foundation” part of that sentence that struck a chord through the Wikipedia community.

One of the main issues here is that the Wikimedia Foundation stepped in to regulate the community of Wikipedia editors which is largely self-governed. This was an unprecedented move on the part of the foundation. So much so, that at least 21 administrators resigned in protest as a result.

First, let’s get a little background on Fram, a very experienced editor who has been a volunteer in the Wikipedia community since 2005. With over 200,000 edits, Fram has been a staple in the community when it comes to enforcing policy, including those relating to copyright. So much so that Fram was made an administrator in 2007, a position of authority and trust in the Wikipedia community.

So, what would cause such an experienced administrator to get banned? Well, it starts with incivility.

Despite being a good editor, Fram had an issue with incivility. So much so that at least 11 Wikipedians had complained about the behavior. It was reported that Fram had received at least two email warnings from the Wikimedia Foundation and then later told a Wikipedia oversight committee to “crawl into a corner and shut up” or “collectively resign.”

Now, a look at Fram’s history shows that despite a history of incivility, the community had never taken sanctions against the editor. It had gotten to the point that the Wikimedia Foundation stepped in to finally curb the behavior.

So now the Wikipedia community is in uproar over the Wikimedia Foundation stepping in to correct an issue that they themselves should have corrected in the first place. It is also sad as a good editor was banned because no one checked the negative aspect of their editing. The issue with Fram would likely not have come up in the first place had the community taken sanctions when it should.

I have no opinion on the Wikimedia Foundation’s action of stepping into a community that is normally self-policed. However, I will say that this is only one of many examples of how not correcting the issue with incivility can cause issues for Wikipedia (and come back to bite experienced users).

Why Is Incivility on Wikipedia Getting Worse?

Incivility is not generally the issue on Wikipedia. It’s the community’s lack of enforcement for such conduct that is the cause for concern.

According to Psychology Today, “there is social contagion with incivility in that if uncivil behavior occurs and is not confronted by corrective feedback or consequences, it tends to be more readily repeated and spreads to others.”

What happens is an editor does something uncivil, but they are given a pass. Generally, this happens when an experienced editor is involved in chastising a new editor. The excuses given by the community are “they are a good editor” or “I don’t see this being an issue since they are so experienced.”

Ignoring the issue only makes it worse!

The above screenshot shows the block log of an “experienced” editor. These are all short-term blocks for incivility. Despite having nine or more blocks for being uncivil, this editor is still allowed to edit. They simply get a week off and come right back and engage in the same behavior that got them banned in the first place.

For instance, the above editor has been blocked in the past for making disparaging edit comments. In fact, their block log says that “any further edit summaries to make any sort of disparaging comments about other editors will lead to another block.” Well, since that warning, here are a few of their “civil comments.”

Instead of being banned for the repeated conduct, the editor was simply given another short block and is now allowed to continue with their uncivil behavior towards other editors.

The point is this. If someone is allowed to continuously be uncivil without any enforcement, they will continue to do so. Repeat violators who are allowed to continue to violate (instead of banning them altogether), will only get worse. You cannot blame them for their actions when so little is done to keep them in check.

Incivility is a Virus

While the above addresses the issue of individuals who are rude and uncivil, there is another phenomenon to consider. According to researchers, incivility can be contagious.

When incivility is left unchecked, as often happens in Wikipedia, others start to think it is a way of life. They themselves begin to engage in the process and spread the toxicity on to other editors.

Civil discourse has long gone unchecked in Wikipedia. As such, it has spread quickly to the point where it has become commonplace.

Volunteer Editors are Declining. Can Incivility Be the Cause?

Wikipedia has an issue with editor retention. There could be many reasons for the decline in volunteer editing, but one of them is due to the toxicity of the editing community and its tolerance of uncivil behavior. 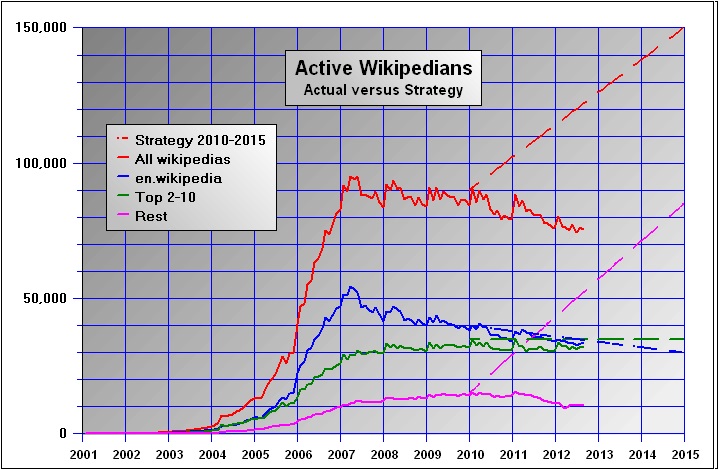 The above is an older graph from Wikimedia Commons, but it shows how the number of editors in the Wikipedia community has been declining. The numbers are also misleading as it is believed that only 1% of registered users actually edit the encyclopedia.

“Especially for volunteerism, finding effective ways to recognize people for their work that do not conflict with their intrinsic motivation can be tricky,” according to Scientific American.

Well, while there may not be “recognition” per se on Wikipedia, keep in mind that disparaging volunteers can cause them to quit rather quickly.

“A toxic company culture will erode an organization by paralyzing its workforce,” writes Brigette Hyacinth, “diminishing its productivity and stifling creativity and innovation … It makes the difference in retaining good staff and also whether your company fails or succeeds.” 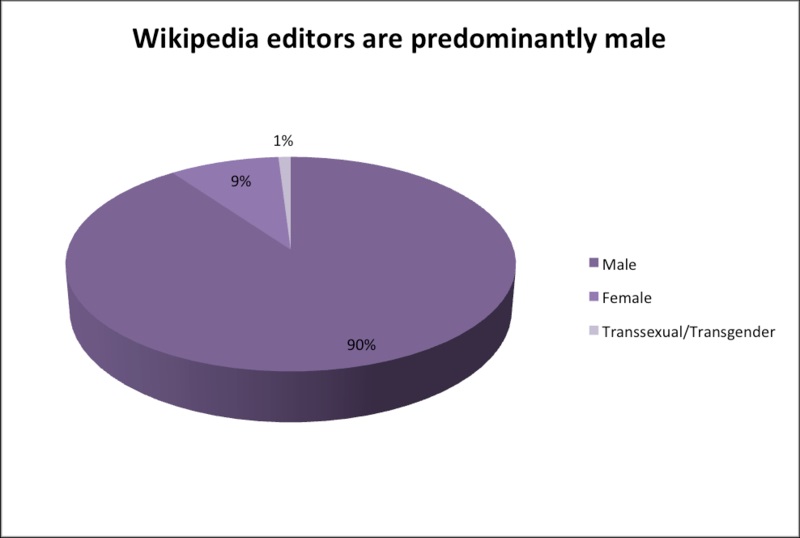 You can also see articles popping up about the disparity with female editors on Wikipedia. Well, it doesn’t take a lot to put together that incivility can be one of the major reasons. In fact, The Atlantic spelled it out in a 2015 article on the topic.

The story involved a female user who was harassed on and off Wikipedia. Another user posted pornographic images on another website claiming to be this editor. This is the ultimate online harassment of a person.

The sad thing is that despite bringing it up with the Wikipedia Arbitration Committee (the “supreme court” of Wikipedia so to say), they declined to hear the case. This just adds to my point that uncivil conduct is going largely unchecked in Wikipedia.

I should not be in business. Yes, you heard me correct. Paid Wikipedia editing isn’t required for a site that allows anyone to edit. However, things get a little tricky in that regard. So much so, that the toxicity in the Wikipedia community creates a thriving business model. So here I am.

Wikipedia requires that people with conflicts of interest disclose their affiliation prior to editing. That means you must state if you are paid or simply have a close connection with a subject. Editors say they just want to be aware of your affiliation so they can work with you to ensure your edits are neutral.

I’ve used this analogy before, but an editor telling you to disclose so they can “work” with you is like someone saying to put your head in a guillotine so they can give you a quick haircut. 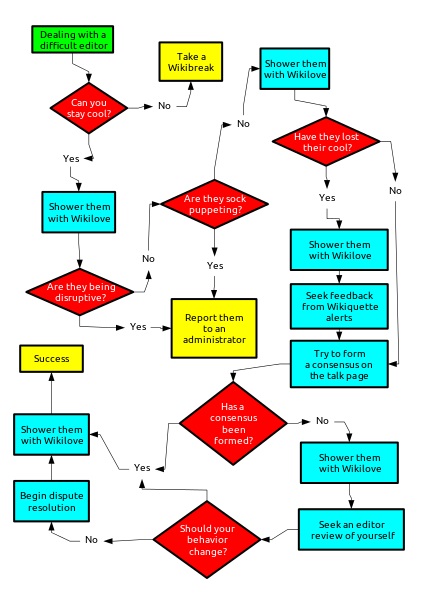 It’s pretty sad when Wikipedia needs a flowchart on how to treat editors. Civility should be common sense. But, as you know, common sense isn’t always so common.

The fact is, once an editor discloses they have a conflict of interest, rarely do they receive any type of civil interaction. In fact, they receive the opposite. When this happens, people get frustrated and give up. Ultimately, they hire a professional editor to help them, only promoting paid editing despite Wikipedia’s hatred of the profession.

What Can Be Done?

Haha. Great question. Why it’s so funny is that the question has already been answered many times. The problem is that no one within the Wikimedia Foundation or the volunteer community has taken the answer to heart.

If you have run into these issues and cannot seem to get anywhere with editing a Wikipedia page, please reach out. My team and I can evaluate the issue and see if we can help. We offer free evaluations through our evaluation form. Or, you can contact us to set up a paid telephone consultation to discuss the issue.