Every day I am inundated with emails asking for quotes to create Wikipedia pages. Inevitably, I turn many people down because they simply don’t meet notability guidelines. What comes next is surprising.

After a few weeks, many of the leads that I turned down still wind up on Wikipedia. The page was likely created by a freelancer who simply doesn’t understand the notability guidelines. What sucks about this is the client is the one who winds up suffering and here is why.

Sure enough, the page is deleted shortly after being posted. The reason? Well, I’ve already talked about it … notability.

What Does it Mean to be Notable for Wikipedia?

Wikipedia has guidelines that must be used to determine if a topic is suitable for Wikipedia.

As a rule of thumb, notability is established when the topic has “significant coverage” in “reliable sources” that are “independent” of the topic. This is sometimes referred to as Wikipedia’s “Golden Rule.”

The coverage must be more than quotes or brief mentions. You need to have press coverage that focuses directly on the topic. In essence, it must be written about you, not just using you as an example or expert on a specific topic.

Wikipedia has dozens of pages that talk about notability. A few years back, I put together a guide to Wikipedia notability that summarizes what it means to be notable. I highly advise looking through the guide to determine if you are notable.

You may be surprised. There are some topics that are very notable in the real world yet do not qualify for Wikipedia and vice versa. This is because it all comes down to having the media coverage.

Some topics are just covered more in the media than others and this is what Wikipedia uses to determine inclusion on the site.

Why Does Everyone Want a Wikipedia Page?

I don’t think there is a good reason NOT to want a Wikipedia page unless you are trying to use it for reputation management purposes.

Wikipedia is great for SEO as it ranks high in search results. Everyone uses Wikipedia and can verify your existence as a brand. It helps with the establishment of a Google Knowledge Graph; is one of the top 10 most visited websites; and some people feel like they “made it” once they have a Wikipedia presence. 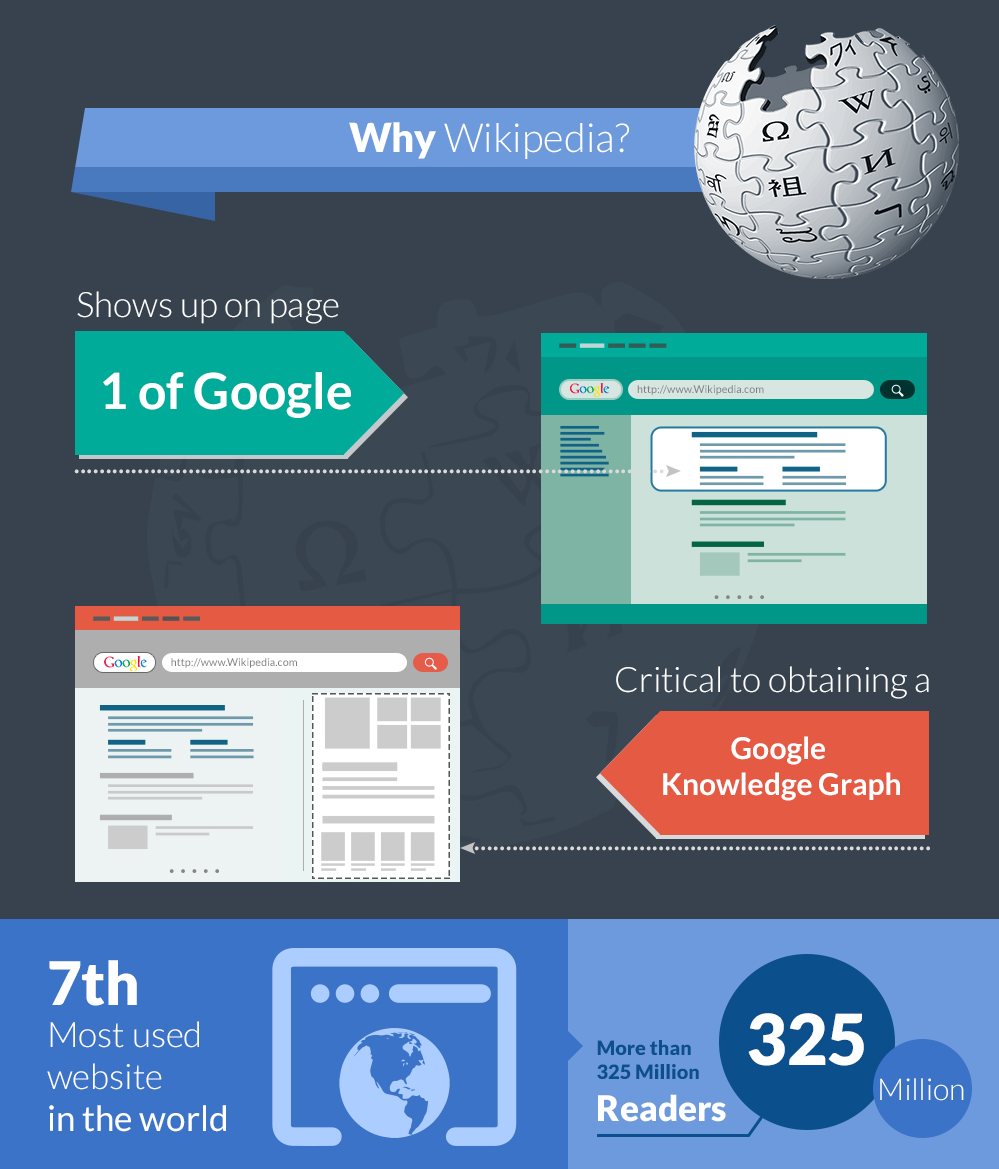 Some people want a page so bad, they are willing to do anything to get one. Despite turning down some leads, I am sometimes offered a large sum of money to do the project anyway (I turn these offers down by the way). Again, I even see some of these pages show up on Wikipedia even after I tell them they don’t qualify and should attempt posting a page to Wikipedia.

For those who obsess about having a Wikipedia page no matter what, I simply ask them to evaluate why they want one.

Is it for branding? You can do that with a website and SEO.

Is it for backlinks? You can do that with other high domain authority websites that are do-follow (Wikipedia has no-follow attributes).

Is it to expand your internet presence? Having a good media outreach strategy will likely work the same or better.

My point is, if you don’t qualify for a Wikipedia page, it’s not the end of the world. Simply step back and evaluate why you want one in the first place. Wikipedia can be used as a marketing tool, but there are plenty of other avenues you can travel if you don’t qualify. You can put your money and energy into something that will likely return the same results (media outreach, SEO, etc.).

Think of Indiana Jones when he was chasing the Holy Grail. How many times did he almost die? Don’t be Indy. The movie doesn’t end the same in real life, especially when it comes to Wikipedia.

I’ve Seen Less Notable Topics with Wikipedia Pages. What About Them?

I get this question often. People ask me why other people with less notability have pages on Wikipedia. Quite simply, there are not enough volunteer Wikipedia editors who police the site.

When it comes to creating a Wikipedia page, you need to follow the guidelines, not what you see in other pages.

In fact, Wikipedia has a rule called “other stuff exists” which basically states you should not create a new page based off an existing page that doesn’t meet guidelines.

Here is a perfect example of how it would work in the real world.

Let’s say you pull into a parking lot and all the spaces are full. You see ten cars parked in a no-parking zone so you decide to join them. After all, they aren’t being towed or getting ticketed are they?

Well, that’s just your luck. As soon as you park, a police officer pulls into the parking lot, gives you a ticket and tows your car. While your excuse may be that others are doing the same thing, the response is going to be simple – just because other people are violating the law, doesn’t give you the right to.

This is the same concept when it comes to comparing other Wikipedia articles.

Now, don’t let this persuade you from using other “good” pages as examples. You need to choose pages that are listed as “good” or “featured” pages as these tend to give you a better representation of the flow of a Wikipedia page.

Let’s Just Post the Page and See What Happens

I have heard this comment many times. Unfortunately, it is a comment that can literally end the possibility of ever having a Wikipedia page.

Here is what I mean.

As stated earlier, people hire freelancers to post pages for them even though they are not notable enough for Wikipedia. The page winds up deleted shortly thereafter (yes, a few slip through but they are eventually found and deleted).

Once a page has been deleted in Wikipedia, it is more difficult to get it posted the second time. Pages that have been previously deleted will be scrutinized more and are often judged with strict standards on notability.

Yes, even when you get more press it will still be more difficult. Editors will see a page posted a second time as someone trying to spam Wikipedia. They will want to see more media coverage than they normally would in order to be convinced that the topic is notable.

That is why it is best NOT to try to post a page on Wikipedia if it doesn’t meet notability guidelines. Yes, you could get lucky. But, it is more likely that the page is deleted.

Keep in mind that editors can also “lock” a page (see image above for Wikipedia’s policy on “creation protection“) which means that no one is allowed to create it again without permission from an administrator. Once you do become notable, you will need to jump through hoops that will take time and energy you could have avoided had you not posted it in the first place.

Long story short, it can be considered spam. Don’t be a spammer.

The only way to become notable is to get more press. When I tell people this, they rush to want to “create” more press in order to obtain a Wikipedia presence. This is the opposite of what needs to happen.

Creating press simply to get a Wikipedia page is wrong. In fact, if a client asks for such, I simply tell them I can help them with one or the other (Wikipedia or media outreach), but not both.

Also, keep in mind that while media outreach will likely get you more press coverage, most of that coverage will be on a contributor platform (e.g., written by a volunteer writer on Forbes as opposed to a staff writer). When this happens, Wikipedia discounts this press and will unlikely count it for notability purposes.

So, I recommend doing media outreach if you are not notable for Wikipedia, but do it for the branding and SEO benefits, not for Wikipedia. A few well written stories on high profile publications will do more for you than a single Wikipedia page ever will.

Don’t rush your Wikipedia presence. If you are not notable, that’s fine. It’s not the end of the world.

Eventually it will happen, or it won’t. However, you can still accomplish your goals with other marketing tools such as media outreach and SEO.

Still wondering if you are notable enough for Wikipedia? Have you determined you are not notable but want to expand your online presence with other marketing tools? Reach out to see how we can help.